Fear vs Targeted Aggression: Can we tell the difference?

It has been said that we, humans, are born as fear based creatures craving attention. I believe that the same idea applies to dogs.

Dealing with fearful dogs is a pretty regular task for me in my work. I spent time with 54 dogs seized from a hoarder that had never seen sun, or felt grass below their feet. I work with bite dogs that have responded to a sudden frightening experience by using the only tools they have: their teeth. Some of my clients are dogs that are overwhelmed by life with humans and need to learn trust. 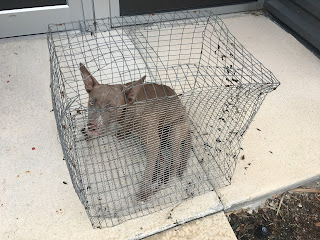 For both species, fear is a survival strategy. If a dog sees something it fears, the smart (long term for survival) is to avoid that scary thing. Given room, the smartest thing is to run away. Conflict with an unknown entity or situation is not necessarily productive when you are trying to survive long enough to continue your species.

A dog’s fear doesn’t have to be “justified” in human terms. Fear is a response to a perceived threat, and that threat may be real - or not.  Perception of threat by a dog to a particular, or general, situation can be a presence (a ‘plus’ situation), or an absence (a ‘minus’), of something. For instance, the minus may be lack of socialization or a nurturing environment, or a plus reaction may be a reaction to a prior, direct experience.

Abuse is one of those direct experiences that can set a dog up for fear. As Ryoko Tomomori, author of “Mignon’s Tomomori-san in the Animal World.” writes: “There was one skittish dog who would flee in desperation when anyone put out their hand. It seems he’s been badly beaten. I wanted him to understand that the human hand isn’t a weapon, it’s a good thing. He was getting old, and I wanted him to regain trust in humans while living out his remaining years.”

Blaming negative behavior on fear or “abuse” is, sometimes, an easy out that allows owners to avoid responsibility for their dogs’ actions. Claiming a dog is showing fear based aggressive behavior quickly moves us to “oh, you poor thing” and away from accepting responsibility for our own actions, or lack thereof.

But fear is not the only reason that dogs show negative behavior. We have cases wherein a dog acts out, deliberately engaging a target (canine or human), and yet there are those who try to excuse the behavior as being fear motivated. Fear is real, but so is bad behavior when it is really an honestly aggressive dog showing offensive (in the sports sense) behavior that has never been adequately addressed by their owner.

Let’s look at an example. A particular dog can, at times, walk past other animals if they are ignoring him/her. The owner notes that the client dog reacts strongly to other dogs if those dogs bark, or even focus, on the client. Assumptions are made that our client is “fearful”, and is responding to other dogs because they are afraid and simply “defending” themselves.

But our client is walking along a street and another dog barks from the safety of its own yard. Our client lunges hard enough to break loose from the person walking the dog and closes the gap to the other dog, and fully engaging the target dog. A fight of course breaks out and someone gets bitten.

But did a fight break out? Is this canine social aggression? Is this a fear based defensive behavior?

A fight, or what we look at as social aggression, is defined by Ádám Miklósi as “…ritualized behavioural units which evolved for signaling the inner state and physical potential of the contester, and does not aim at causing damage in the other.” (Miklósi, 2007). In this case, contact was not a social dispute: the initially barking dog was secure in its own yard. The attacking dog was at a distance, initially managed by its owner.

Is this fear based behavior? Let’s look at both dogs. The dog in its yard was accompanied by an owner, and was restrained by a tether. When that dog saw a strange dog approaching, it may have responded from fear. A fearful dog may show threatening behaviors to secure space from a frightening stimulus. According to Dr. Suzanne Hetts, “Threatening behaviors (are) designed to intimidate, repel, or warn another individual to stay away. These behaviors are not meant to result in harm.” (Hetts, 1999). Further, Dr. Hetts says about threatening behaviors “Their goal is to warn other individuals to stop what they are doing.” Thus threatening behaviors, such as barking or growling, are intended to communicate a dog’s desire to stay separate, to avoid contact.

Territoriality can also cause threatening behaviors. After all, the whole idea of territoriality is to “…repel, or warn another individual to stay away.” Protection of territory or resources is rational and expected. Territorial behavior can also be based on fear of the other animal, trying to put up a big front to keep the other dog away. Barking by the tethered dog, then, makes sense.

The dog that targeted and deliberately closed with the tethered dog? That is much more of a problem.

A dog that responds to the sight or sound of another dog is typically termed “reactive”. That is, the dog gives an unreasonable response to a normal behavior or situation. Desensitization is usually the first avenue of attack in fixing this behavior.

Desensitization does not always work. Some dogs have to be managed, despite training, to ensure that they do not get into trouble. This can involve physical management, including making sure the animal is restrained by a healthy and able handler if out, and perhaps through the use of a muzzle for safety, both of the dog and of others.

Owners that fail to recognize the consequences of managing a dog with problems face other, bigger problems. Liability for their dog attacking another animal or person is the least. I have seen a case where one owner’s dogs were extremely reactive towards a neighbor’s dog. This owner was warned not to move both of their dogs past the neighbor’s property at the same time since they were a small person trying to manage two large, muscular dogs. One morning this owner got in a hurry and disregarded the management need. We will never know what happened exactly, but the opposing dogs connected and the owner died a horrible death.

Back to the case at hand: the outcome of the incident was injury to dog and human. The dog that targeted, lunged towards, closed the gap to directly engage the other, tethered dog was not afraid. That dog was on the offense, more like a guided missile (or muscle) than a shrinking violet trying to escape a scary thing. Defensive fear and offensive targeting are two very different things.  Owners and trainers must recognize that reactivity and fear may be related, but offensive targeting is a serious problem that must be aggressively managed before, during, and even well after behavioral modification work.