Do you and your dog resonate?

Humans and dogs give and take. Sometimes this giving and taking is in sync, it is resonant. The two parties, you and your dog, are part of a moving, fluid giving and taking. You move, act, feel together. Neither of you is really leading the walk or activity, but you both get where you are going. Neither of you is making conscious decisions-the resulting arrival is cooperative and seemingly the natural consequence of just being.

Dissonance is just the opposite. You zig when you dog zags. You stop and he goes. You don't quite get in step, and despite a lot of effort, you never get anywhere.

Dogs are social creatures, and for the most part they want positive input and social connection with both other dogs and with humans. After all, with a history of somewhere over 15,000 years together, there are social ties that keep them from avoiding us, even when perhaps they should. The desire for constructive, positive social contact can help balance whatever dissonance has driven them into building a wall between themselves and the “outside” world. 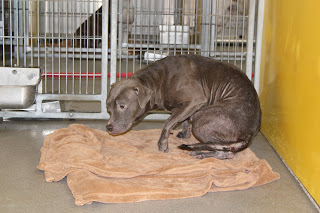 Developing a relationship with a dog, particularly a dog that has built a wall of aggression or fear, means I have to build resonance. I have to establish a reciprocal interaction with the dog. Working with a seriously aggressive or fearful dog takes clear and complex give and take. I have to safely let the dog know that I am not a threat, and not a danger. I also have to let them know, without frightening or “dominating” them, that they cannot make me go away. They cannot frighten me. The worst they will get from me is a removal of my attention.

I have at times referred to this process as “push-pull”. The germ of it began when, years ago, I saw Monty Roberts at an early exhibition working with horses. He had/has a technique that he called “join up”. In his world, “join-up” was a process by which he drove the subject horse away from him by using body position and motion to appear threatening. He then changed his position and motion in a way that the horse interpreted as soliciting contact. By alternately appearing as a potential threat, followed by welcoming the horse, the horse appeared to become more accepting of Roberts. Finally the horse, who started the demonstration shying away from Roberts but was unable to flee due to the round pen they were in, appeared to develop a relationship with Roberts that let him approach, interact, and guide the horse.

My reaction to this was two fold. First, it dawned on me (slow that I am) that dogs, like horses, have clear and usable language, but that the language is based on body position and visual cues, not verbalization. Second, although horses are prey and dogs are opportunistic predators and scavengers, in both cases social contact can be used to develop a relationship. Relationships did, of course, already exist: but in both cases, trainers of old used force and fear and physical punishment to develop relationships based on dominance and submission. Both schools of trainers made the trainees subservient, too often complying because they feared the consequences of non-compliance.

Roberts seemed to be more involved in developing trust. Although this was not 100% benign (he did “send away” the horses first) he sent the horse a message that said “I am not going away-you have to deal with me. When you do I will make it worth your while.”

That made sense. Run away from me and nothing good happens. Be my friend and not only do you get my positive attention, but other good things happen. Yeah. That sounded good.

But as I said, horses and dogs do have differences. Horses are herd animals that want to be part of a social group. They will accept humans as part of that, but ultimately they are prey, and are always just a little worried that they will be lunch. Dogs, on the other hand, can function as predators. They have teeth: they are packing. Even the smallest of them can pull their blades and try and shred something that is scary enough. And when scary enough kicks in, social niceties go goodbye. Stress kicks in, higher learning goes out the window. Frankly, if you are dealing with an 80 pound dog in full predatory or defense mode, I don’t care how big you are: he/she will kick your butt. You are gonna bleed, and you are getting serious damage.

So the idea of trying to apply force, even at the merely social level that Roberts operated, wasn’t the total answer with dogs. A dog wants social contact, but is not a herd animal. If they are safe, or feel like they need room to feel safe, pushing them away is just silly. They can do just fine without you. They are not living a life worried about being lunch.

After all the centuries among us two leggers, dogs do want social contact. And we have COOKIES. That is a key we can use to unlock behavior we want. Positive social contact is not achieved by force. You can’t threaten anything into loving you. After all, we talked about learned helplessness last time, and we discussed how it doesn’t lead to a positive relationship. It leads to dependency, more fear, and less trust.

Over time I refined my interactions and observed-a lot. One thing I learned was that a fearful dog, or a dog that seemed to be aggressive, was often receptive if they were helped to see that their old behavior (fear or aggression) was not effective. Showing that behavior didn’t cause any pain or discomfort, but it didn’t succeed. Whatever they were afraid of, whatever they were protecting themselves against, didn’t have to be a threat. It could be neutral, or it could actually be friendly, especially if it was a human.

That process of give and take, the back and forth of signals, mutually understood and accepted, that is what develops resonance between me and a dog. We begin to operate in concert. No, our “energies” do not somehow become synchronized. (Let’s see someone show up in court and show their “energy detector”. Or publish it in a peer reviewed journal. Not going to happen.). But there is resonance, a give and take that becomes a habit. This is similar tot he resonance that develops between long time friends, or life partners, those people that finish each others’ sentences. The quiet moments of communication that two people share without even talking. This is what I aim for when interacting with a dog that ha problems. This is how I can, at times, deal with dogs that others can’t. This is the most rewarding of things that happen in a training or therapeutic situation, the connection, even for a short time, where trust exists and movement and intention become connected. 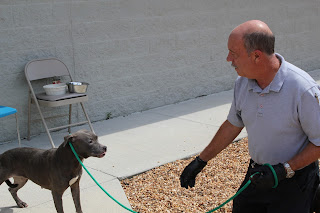 I’m not special in doing this. I have seen it in other trainers, the good ones. We all have the ability to establish resonance, especially with our own pets. The animals that we spend day in and day out with, the animals that share our lives, we can and should develop resonance with them.

Is this whispering? Is there some secret language that only the select can speak, that only the particularly gifted can parse and comprehend, passed secretly from generation to generation?No. There is no whispering. When a dog and I exchange information, when we share, it is all right out there. Anyone can learn to speak dog, and anyone can learn to receive the messages sent. To do so we need to do one thing above all else: listen. The character of Piglet in the Winnie the Pooh stories said it once: “Lots of people talk to animals: very few listen.” We need to listen, to observe, to connect. 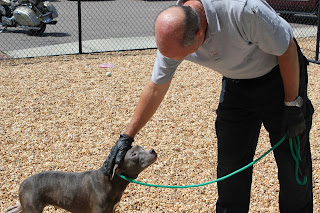 Is it magic? No. There is no magic. Unless of course you consider two organisms working collectively in a positive, mutually respectful and resonant way to be magical. That I can buy-yes, the collective development of trust, seeing that light come on behind their eyes, feeling the connection and seeing a once fearful or aggressive dog drop their defenses, cross that once uncrossable gulf and let you in-that is magic.