I would like to invite all those in the Central Missouri area, and anyone else wanting to come for a visit, to join me July 7th and 8th in Springfield, MO at Drury University for two days of dog bite seminars. Saturday the 7th will be an all day course on investigating dog bite fatalities, and the audience will be limited to Law Enforcement, Animal Control, prosecutors, attorneys, and judges.  Some active cases will be discussed, so ID will be required at the door.
Sunday, July 8th, will be a public event addressing dog bite investigations and behavior behind dog bites for owners, trainers, and interested dog lovers.  This will be a less technical presentation (less gore) and we will also discuss bite prevention and Breed Specific Legislation issues.
Both event are free due to the generosity of Drury University's Law Enforcement Academy, the Drury University Animal Studies Program, and local business sponsors, all of whom I thank in advance.  Thanks also to Jennifer Kimberlin, who has run with this furiously to put it together, and Judy Luther, who suggested coming to Missouri and started the ball rolling.
AS I said, these events are free, but registration is required as we are limited to 100 seats each day.  Attached below is the registration info-PLEASE JOIN US! 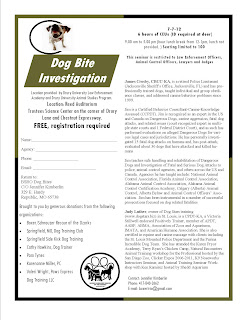 Posted by Jim Crosby at 7:34 PM No comments:


UPDATE: As of this morning, 06/14/2012, Lennox has not been destroyed yet.  There may be additional efforts that can be pursued through the English Court system outside Northern Ireland, and my understanding is that those are being considered.  Please keep Lennox in your thoughts as the end of the line may not have been reached.  I know directly that there are willing sanctuaries that will shelter Lennox outside the jurisdiction of the Northern Ireland authorities and thereby keep the residents safe from this apparentl public threat.  I have made myself available to go to Northern Ireland if needed to evaluate him-after all I am a) male, b) a retired police officer, c) a Certified Behavior Consultant, d) a former animal control agency director responsible for determining whether dogs are legally dangerous and e) highly experienced in evaluation and training/rehab of what Northern Ireland lists as "prohibited dogs".  I believe that those qualifications are well in excess of the BCC's star witness.  And although Sarah Fisher has presented reasonable and supportable conclusions assessing Lennox, her gender seem to weigh against her credibility in the Irish Courts-a factor that is honestly incredible to me.

In any case, if the Court really wishes a competent, fact based and objective evaluation from a male retired police officer familiar with the breed involved AND who has conducted evaluations of over thirty animals that have killed humans, coupled with contact and evaluation of hundreds of dogs adjudged as legally dangerous, I am willing to start from go and give a thorough and fair, observation based assessment of Lennox noting his strengths and warts all, as an independent and qualified, credentialed and dispassionate observer.  And if he qualifies for sanctuary placement, and the BCC requires competent, secure transport by someone able to insure that Lennox will not ravage the countryside on his way out of the country, I can personally escort him (probably without SAS assistance) to his safe exit.
Posted by Jim Crosby at 8:54 AM No comments:

It is morning here in the Eastern US, finally a sunny beginning in Florida after days of rain. But the sun is dimmed for me today with the news from Belfast that the High Court has denied the last appeal for Lennox, the dog doomed by a dressmaker’s tape.

Those of you who know me know that, when it comes to dogs, especially those accused of aggression toward humans, I am not all sunshine and unicorns.  I am a realist, and know well that there are dogs that are dangerous.  Not every dog can, or even should, be saved.  Thirty of them that have killed humans have passed through my hands.  Yet I demand, from myself, two things: one, that I search for the total story behind an attack, both the pretty and the gruesome, and that secondly every single dog gets a fair, fact- and observation-based evaluation, without presumption of guilt or innocence, and as free as I can make it from bias based on type or breed.

This has brought criticism.  People have asked “How can you say that (breed of dog) is not vicious?”  They make sweeping assumptions based on their perceptions of the exterior of the dog.  This is exactly what happened with Lennox.  Massive assumptions have been made by the Belfast Council based on physical characteristics that have nothing to do with temperament or behavior, and those assumptions have now cost the dog his life.  Lennox was, remember, not a dog that had bitten, threatened, or even particularly worried anyone.  Lennox had been lawfully, openly registered for five years with no reports or incidents before being seized for his looks alone.

The “evaluation” of Lennox’ behavior, after seizure, that the Court has accepted lock, stock and barrel was  by a police dog handler, not a behaviorist-or even someone familiar with the variety or individuals of the type of dog Lennox is accused of being.  The police dog handler is, by virtue of his experience, trained in evaluating police dogs-but there is nothing to indicate the man’s expertise extends beyond that technical and specific field.  Frankly, from the videos I have seen and the reports I have gotten, I agree with Mr. Talleck-Lennox was not suited to be a police dog.  But then that was never the question, was it?  The real question was whether Lennox, a quiet and stable assistance dog for a young person, was a threat to the public in Belfast.  And by the latest decision, apparently stable, quiet assistance dogs that have large heads are dangerous in Northern Ireland.

Dangerous dogs have many faces.  I have seen dangerous dogs that looked like Pit Bulls; and like Huskies, and Rottweillers, and Chihuahuas, and Labradors, and Goldens…and on it goes.  They have as many faces and as many masks as human killers.  Yet they all have one thing in common; they have exhibited observed behavior that shows they present a clear danger, or have behaved in a way that caused serious injury or death.  There may be, for animals that have not yet caused serious injury, the possibility of rehabilitation and retraining with dedicated management and care.  Others are simply too far gone, and those must be either managed in isolation by skilled handlers or destroyed.  But Lennox was neither of these.  Lennox was just a dog.  A service dog.  A member of a family that had never even run afoul of the local constabulary for a wild Saturday night at the pub.  Lennox is a clear victim of discrimination based on physical appearance, and adjudged a threat for that reason only.

My family, back several generations, came from the UK and Ireland.  Although I have never been the victim of such, I know from history that my ancestors were victims of discrimination when they came to the US, discriminated against because they were Irish.  Yes, I have seen the old signs “Irish not Welcome”.  I have heard the ditties about the “dirty Irish” once sung by children and adults alike.  Perhaps that is why I am surprised that the Irish Court has perpetuated the same divisive discrimination that their own, our own, have suffered.

For now, although we mourn Lennox and grieve with the Barnes family, we have to make Lennox’ loss stand for something, mean something.  We can’t just hang our heads and cower at the local, drowning our outrage.  We, and I mean we as dog owners and caretakers and trainers and lovers and family must work to eliminate discriminatory laws in Ireland and the UK and the US and Australia and wherever they are.  We must demand that dogs be given a fair shake, whatever they look like.  We must demand laws that adequately and firmly address bad behavior, whatever mask it wears, but that behavior be quantifiable and clear, unaffected by physical type or perceived cuteness.  A nasty Cocker Spaniel may well look like an angel while showing behavior more appropriate to a jackal. Behavior is behavior and is observable, definable, and quantifiable.  We must demand clear behavior based laws and determinations.

In the next few days I will be seeing a new client.  The behavior described to me on the phone consultation has me very worried.  This dog (not a Pit Bull) is going to grow into a large dog that will have the physical strength to potentially be a threat.  Yet when I meet this dog we will be starting from ground zero; I will observe, document what I see as behavior, discuss the dog’s background, training and past behavior, and I will make recommendations based on that data-not on what the dog looks like.  If Lennox’ loss is to mean anything we must all work to make that kind of evaluation the standard, not the exception.

My deepest condolences go out to the Barnes.  I regret that I never got to meet Lennox.  I can’t honestly say that I would have given Lennox a clear pass; that I never know until after I work with a dog, one on one.  But Lennox would have gotten a fair evaluation, documenting the behavior seen and quantified, from square one.  The size of his head would not have mattered-it would have been the size of his heart that counted.

LATER UPDATE:  Please see my update of 06/14/2012.  Lennox has NOT been killed as of 06/25/2012.  The fight must go on!  Please do not give up on this poor boy.  Victoria Stilwell is still fighting, as she has for months, for Lennox' release and I happily, and fully, support her efforts for a reasonable conclusion to this whole episode.  My first post on Lennox was in October of last year (not just now when it has become popular), and Victoria was already involved then.  She brought me in to advise and help.  Sarah Fisher and her crew in the UK have been doing their part, trying to bring professionalism and fair treatment to the case, which includes Sarah's own evaluation of Lennox.  All the 150,000 of you who have been long term supporters of this two year effort must stand solid and keep your efforts and energy up.  Please do not give up the fight!

Lennox was destroyed this morning in Belfast.  The world is a little poorer, and a little sadder today.  Victoria Stilwell and Sarah Fisher were on scene and working their best to the very end. I have to thank Victoria and Sarah for all their efforts and We MUST move beyond judging and anticipating behavior based on appearances to taking each person and animal as an individual. In the Nineteenth Century we proved that classifying people as "criminals" based on physical characteristics was grossly inaccurate. Why do we insist on following disproven, discredited pseudoscience to assess the possible behavior of dogs?


Each dog is an individual, with particular characteristics that must be individually assessed. We must use the loss of Lennox to stop stereotypical, and indeed racist, assumptions.  Please don't let Lennox' loss stop the efforts to ban illogical and unjustified legislation, no matter where it occurs.  Bad behavior is exactly that-behavior.  Press for behavior based, logical, reasonable, and enforceable Dangerous Dog laws that address the real cause-human failure.

RIP Lennox-and I can only hope that you are finally free to run and be yourself.
Posted by Jim Crosby at 10:26 AM No comments: