It happens suddenly some times. 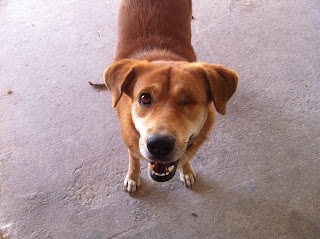 We are out, or at home, with our Wookie-like companion (yes, this is Star wars release week), and everything is going swimmingly well. People are greeting the Wookie, our Wook is happy and loving the attention, getting pats from strangers...and suddenly Wook gives someone the look and backs away. We don't see a problem. We get defensive and tell Wookie to go say hello, and Wook responds by backing away more, and maybe even growling or raising a lip to show just the hint of teeth. We get upset. Maybe we even scold Wook, and amid profuse showers of apologies we retreat, internally (or otherwise) cursing our stupid dog that chose that moment to go all Cujo. We don't get it, and we might assume the worst-our dog has suddenly developed "aggression problems."

What is going on here? Has the Wookie "snapped?"

The incident makes more sense if we understand that animals assess and classify everything they encounter into one of two default states: safe or unsafe.

Our pets, all animals (ourselves included), are constantly evaluating their environment, scanning for threats. It is not something we have developed as "sophisticated" organisms: this evaluation is a survival mechanism that goes back into what we call the reptilian brain, that part of us that is trying to keep us from being eaten. Dogs have this too. They are, no matter how brilliant and secure, constantly checking for survival cues. Threats may be learned or automatically recognized. The onrushing charge of a bigger animal makes hardwired sense. Dogs understand and avoid this threat. We also recognize big issue threats like this pretty well.

Some threats, or perceived threats, are less obvious. Our dogs have a fine sense of position and body language. Their hearing is different, with a far wider range than ours. Their sense of smell is phenomenal. They pick up cues the we miss. I have said before that I believe dogs think we are their “slow” relatives. Our dogs, while evaluating the environment, are constantly evaluating people too. They are calculating safe versus unsafe.

Cues, subtle and not so much, couple with socialization and training to form the basis for their decisions of how to act or react. We, as good owners, have taught them a lot of different things. We have taught them manners and guided their development as welcome additions to the social scene. We have nurtured their positive interactions with people and dogs, and given them clear but generous boundaries within which they are safe and secure.

But sometimes our Wookie picks up cues that we miss. We may never know just what they are: it could be the scent of something that lingers around a person. It could be small movements that don’t add up for Wookie. It may be pheromones that we cannot possibly detect. After all, dogs can detect chemical imbalances like a pending seizure. We only consciously pick up a tiny fraction of those cues, but have you ever met someone who just gave you the willies? That. Exactly. Our best buddy the Wook has picked up…something. 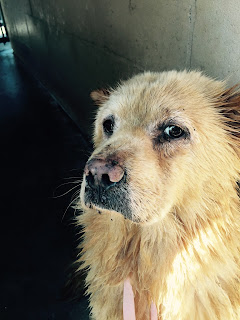 Just because there is something strange in the air, Wookie doesn’t get a free pass to be a jerk. We do demand a certain level of civility. No lunging, snapping, or acting like a wild thing towards people. We can, though, pay attention to the Wookie’s actions, and reactions, and we can respect Wook’s space. Remember that we talked about “Minding the gap” several posts back? If not, take a second and go check out that post here.

Minding the gap and respecting our buddy’s space is critical when dear Wookie shows that something is off. Forcing contact and the invasion of Wookie’s personal space doesn’t accomplish anything other than stressing him out-and maybe setting him up for future problems.

If you place your Wookie in a social situation and he tries to tell you he is uncomfortable, respect that. First, as Douglas Adams said, “DON’T PANIC!”. Don’t allow Wookie to respond with force, but allow Wookie to maintain his space.  Redirect him into a safe, quiet behavior and respect his reaction. Be a buffer between Wookie and the person he is reacting to. Ask them to give Wook his space. Tell them it’s not personal, but don’t push the issue. Remember when Wookie is calm to reinforce that response. He may well relax enough to reevaluate his perception of the person and decide to solicit contact after he sees your reaction is stable and calm.

We must remember always that our perceptions and our companions’ perceptions can be profoundly different. Acknowledge this, respect this, and pay attention.

Personally, if my dog reacts badly to a particular person, I tend to believe the dog.
Posted by Jim Crosby at 12:49 PM