They'd Rather (not) Be in Philadelphia

Not that I have anything against Philadelphia....in fact I enjoyed my recent trip there immensely-the architecture and history of the place is tremendous.  Loved the Wannamaker Building and the giant pipe organ....but I refer to three dogs I met, and will explain why they want to be elsewhere.

Although I am going to skirt some details here, let me give you the background to my trip last week.  In 2009 a man was arrested in Philadelphia and arrested for animal cruelty.  Five dogs, identified as "Pit Bulls", were seized.  Two of those survived and were eventually transferred to Rescue.  Here is one, a little girl named Emily: 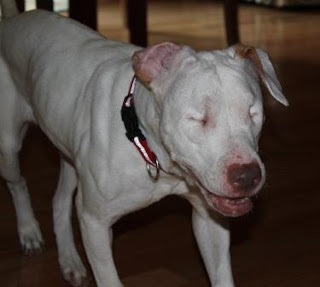 Emily
Emily had a rough time in her prior captivity, and after being rescued had to have both of her eyes surgically removed.  To jump ahead, Emily is now safe, after many travels, happily bumping about in the living room of Kathy McGuire of New Jersey Aid for Animals.  Emily may not have eyes, but after spending time with her I can say that she sees far better with her heart than most of us "fully sighted" people.

To go on with the story, time passes.....and in August, 2011 police are again called to the same residence, same abuser, five new dogs.  This time they find both a dog and a human dead.  The human victim was a mentally ill woman, off her medications, that appears to have stabbed one of the dogs to death.  The stabbed dog presumably managed to kill the attacking human before he expired from his wounds.  The other four dogs, although present, were never positively identified as having taken part in the attack on the human, although detailed forensic testing was not undertaken.  These four remaining dogs were taken into the custody of Philadelphia Animal Control.  The dogs were, at the instruction of the City of Philadelphia, isolated in double kennels, forbidden any outside time or human contact.  I know that it must have been hard for the staff of Philadelphia Animal Control to have to watch these dogs languish, no human contact at all. In fact, according to the rules imposed on them, the staff had to drop a guillotine door down in the kennels separating the dogs in one side, place food in the unoccupied side of the kennels, then raise the door to let each dog have access to their food.  No pets, no walks, no outside exercise-nada.

But as tends to happen, angels appeared.  A benefactor found out about the dogs' plight.  Kathy McGuire and attorneys Robert Muensch and Nadia Adawi stepped in and found that the dogs were not altogether forsaken.  They got support from the local DA and the Court and secured a Court Order that allowed evaluation of these dogs for the purpose of relocation to a sanctuary rather than simple destruction.

Which is where I came in.

After stopping in at the 2012 No Kill Conference at George Washington University in Washington, DC for two days I made the trek up to Philadelphia.  With Nadia as my trusty camera person, and accompanied by the wonderful Irv Samuel we went to Philadelphia Animal Control and met the dogs, Bleu, Goldi, Shorty and Pepper.

Now remember-these four were accused of being involved in a human fatality.  The Animal Control facility had been under strict rules, imposed by the City, that the dogs were not allowed any direct human contact, no training, nothing:  I had no idea what I was going to meet when I tried to establish contact and evaluate them.

So I put on my Kevlar gloves, strapped on my heavy protective chaps (sorry for the camo-that's the color they came in, and bruising is a heck of a lot better than loosing flesh in a bad bite), and met the beasts.

And made solid friends.

The first dog, Bleu, was reported to be the "most dangerous" of the four, so that is where I started.  Although the full evaluation went for over an hour, here is a bit that Nadia put together with a musical background.  Watch this, remember the circumstances this dog had been kept under, and bring out your tissues....

This boy exemplified all the great things about dogs-and their seemingly unlimited capacity to forgive and accept humans for the damaged creatures we are.  Bleu started out fearful in his kennel-understandable-but within a very short time he was allowing me to pet him, handle him freely, and he was voluntarily seeking proper, appropriate contact and play!  Granted, he is a bit of a butthead, wanting to be a bit pushy, but he accepted gentle correction, both physical and verbal, and never once showed me a single sign of aggression-offensive or defensive.  And when he came outside....the joy on his face to feel the sunshine and fresh air made all the cases where dogs were too damaged or deficient to be safely moved along easier to take for a moment.

Now, is Bleu ready to go jumping back into a loving family?  Not quite. He still needs manners (he is a strong boy), some rehab, and a carefully chosen placement that understands his background (FULL DISCLOSURE PLEASE) and is willing to accept the training and management he may require.  I am not sure I would risk him with kids until he has better manners-mostly because he is strong and jumps up.  But Bleu is saveable.

I also worked with Shorty and Goldi.  They too are saveable, with cautions and informed placement.  Shorty is also a strong boy needing manners, although he is less pushy than Bleu.  Goldi, on the other hand, is very soft and will need a sensitive touch to bring her up a bit and give her some needed confidence.  Pepper sadly is the down part of this story.  She went into the abusive home very young, was removed a year ago at probably a year of age, and has spent the last year in isolation.  She is extremely fearful, and her quality of life has to be affected by that overwhelming fear.  She did snap three times at me, all in fear, and even though I sat with her for over an hour I was never able to touch her or reassure her that the world was an OK place.  She is the down side of this case.  However, three out of four is to me, when mostly the dogs are all destroyed, a winning day.

So these three dogs are still at Philadelphia Animal Control with Kathy McGuire of New Jersey Aid for Animals working hard and fast to find them safe sanctuary and rehabilitation.  Kathy can be contacted at 856-498-3978.  If you are a sanctuary or rehab facility that can satisfy the City and is willing to take on these guys, please call Kathy.  We don't have a lot of time.

And remember-not all dogs in the world can be saved, but to the ones that can, it means the world.